Home  / All about tea - The first step into tea wisdom.
Next India and Nepal – The Legend of Chai

If you’ve spent any time living in England or Ireland, two of the world’s largest per-capita tea drinking countries, then you’ll have enjoyed mug after mug of Indian tea. But there’s more to the subcontinent than bags of British-named tea like Tetley or Twinings. In this blog post, we’re delving deep into India’s tea history and uncovering the legendary origins of chai.

Tea in India – A History

Historical records indicate that tea has been consumed in India since as far back as 750BC, as locals enjoyed the native tea plants of the Assam jungles. However, tea was originally used more as a cooking ingredient than a beverage. Visiting India in 1538, the Dutch explorer Jogn Hughen von Linschoten noted that as well as boiling the leaves to make a drink, Indians cooks would prepare tea leaves with garlic and oil as a popular vegetable dish.

It was the 19th Century when India began to produce tea on a commercial scale, all to meet the demands for the drink across the British Empire. Wary of trading too much with China, British merchants made the decision to grow tea in colonial India. After Robert Bruce was introduced to Indian tea by a Singhpo chief, Bisa Gam, in 1823, the overseers of the British Raj realised that the local assamica tea plants were far better suited to the region than expensive Chinese sinensis teas.

After spying on Chinese tea productions (with Robert Fortune “acquiring” 20,000 saplings and 85 workers in 1848), the British began to put the local population to work.

In Assam, Nilgiri and Darjeeling, large parts of the jungle were cleared for tea production as the British established plantations to provide an alternative to expensive Chinese tea. It took a while for the Empire to develop a taste for the Assam tea they viewed as inferior, but tastes soon changed. Even in the United States (not a famed tea-drinking nation), by 1887 more Indian than Chinese tea was being consumed.

But while today’s large tea plantations are the result of the British Empire’s insatiable demand for tea, India’s tea history really starts with the drink that Indians call chai.

The Legend of Chai

Like any famous beverage the origins of chai are steeped in legend.

The story says that an ancient Indian king had trouble remaining alert during long and challenging court sessions. By boiling the leaves of the tea plant with water and spices, this king remained an alert and effective ruler, and so chai was born.

Over the coming centuries, travellers and traders from Gujarat, Maharashtra and Bengal would buy the leaves and spices and add them to the high quality milk their regions of India were famed for. Soon, thanks to the vigorous cross-country trade, sweet milky chai would be the favoured drink of workers – a tradition that remains to this day.

The British also left their mark on chai. Typically, the gently spiced masala chai is served as an afternoon snack along with toast – a nod to both British and Indian tea drinking traditions.

The spices in masala chai change from region to region, but a typical chai blend will contain cardamom, cinnamon, ginger, cloves, pepper, mace and nutmeg. Wherever you go in India, a Chai-wallah (wandering chai seller) is certain to be close by!

In the 21st century, India is one of the world’s largest tea producers and exporters, with over one million Indians employed in the tea industry. While much Indian tea, especially from Assam, is kept to produce chai for the local market, a huge proportion of Indian tea is exported to the British tea bag producers, keeping that country well supplied with black tea.

India’s most famed specialist tea producing region is Darjeeling, although this region is suffering due to increased competition from neighbouring Nepal, whose high peaks and climate make for ideal tea growing conditions.

For most Indian teas, two classes of production are used, although smaller artisan farmers do use specialist methods for more specialist teas. The production classes are:

“Crushing, Tearing and Curling” is an industrial method developed by Sir William McKercher in 1930 in an attempt to help what was still the British Raj compete with China.

First, leaves are rested, then cut and crushed into small pieces. These pieces are then torn into even smaller pieces and rolled into beads. This makes a tea which is perfect for use in teabags, even though it damages flavour and aroma, leading to a lower grade tea. Not a problem for the average British tea drinker with a mug full of stewed tea, milk and sugar, but not a method tea connoisseurs will be too impressed with!

For higher quality black teas, Indian producers still use the five steps developed by the British in the 1860s:

Resting: Resting the leaves on large plates and allowing the sun to dry them activates a number of enzymes and reduces moisture content.

Rolling: This breaks down leaf membranes and releases oils. The more pressure applied to a leaf, the more oil is released and the greater the effect of the next step…

Oxidation: Once tea has been rolled, it is left in a warm, humid place for between 30 minutes and four hours. This affects the flavour and character of the tea.

Drying: The leaves are placed on large heated platters, drying the leaves and stopping the oxidation process entirely.

Both orthodox and CTC teas are then graded by leaf size, quality and number of buds. This is rarely seen with speciality tea, but you may spot some of the following abbreviations on commercial Indian teas:

All tea production, certification, exportation and trade is controlled by the Tea Board of India.

High in the foothills in the Himalayas, lies Darjeeling (land of storms).

The village of Darjeeling, is located 2000 meters above sea level and looks up to Mount Everest. The first tea was planted here in 1856, and nowadays there are 100 tea plantations close to the village. area is great for tea with high, steep slopes perfect for drainage. It has a mild winter and summer, and a lot of rainfall, perfect for making quality tea. The fog that lies over the region protects plants from too much sunlight, which can be bad for young tea leaves. Today this is the most highly regarded tea production region in India, only tea grown here can be labelled as Darjeeling Tea – “The Champagne of Black Teas.”

Assam, in the North East of India, is where the famed tea cultivarCamellia Sinensis Assamica was first discovered. This sturdy, large-leafed plant produces full-bodied black teas, although recent experimentation has delivered a number of Assam white, green and oolong teas too.

The climate of Assam is tropical and wet, and plantations are fed by the Brahmaputra River, making it ideal for large volume tea production. Assam produces more tea than any other region, and its black teas are used heavily in classic English blends and Indian chai.

Similar in climate to Darjeeling, and lying to the north between Nepal and Bhutan, Sikkim was developed following a government program that shared Darjeeling cultivars with the producers on the India/Bhutan border.

Located in South-eastern India, the Nilgiri Hills are part of the Western Ghat range known as the “Blue Mountains.” This is India’s third-largest tea producing area, and plantations here grow a sweet, spicy tea for the local market. The climate allows for a year-round harvest, but with a main plucking season between December and March.

Two natural parks, Mudumalai National Park and Mukurthi National Park, have been set up to preserve the area’s climate and natural beauty.

Dooars (which means “doorway”) is the gateway to North-east India and Bhutan. A tourist paradise with tropical forests, meandering streams, and undulating plains, this wet region is also perfect for growing teas. Dooars tea is usually clear, black and heavy, with tobacco undertones and brisk notes.

The Kangra valley is located in the foothills of the Dhauladhar Mountains and subject to constant rainfall. The local climate is perfect for organic tea, thanks to the region’s lack of pests and insected. Kangra is famed for green and black teas.

6000 feet above the Idukki district, the hill station of Munnar is home to valleys, mountains, forests and wildlife sanctuaries. It’s also home to amazing teas which produce golden yellow teas with a hint of fruit and a sweet biscuit fragrance.

The prime of Darjeeling teas and Indian teas in general. The first flush starts in the middle of March and ends in the middle of May. The famous first flush yields teas with a light body and amazing rich aromas. While the world used to think mostly about the second flush, recently connoisseurs are more and more interested in the first flush. Like most Darjeeling teas the first flush is not fully oxidized, resulting in a lighter taste with enhanced aroma. Some even go further then that and make it so light that it’s more reminiscent of an oolong tea then a black tea.

Running from the end of June until mid July, the leaves for second flush are picked later in the season. This tea is famous for its combination of mouth feel and malty, fruity tones and aroma. They are processed longer which helps develop a more mature sweetness compared to the first flush.

Harvested after the monsoon rains and before winter in October and November, the autumn flush produces even bigger leaves the second flush. These leaves used to be ignored as leftovers, but nowadays producers are really raising the quality of this harvest, for those that want a softer-bodied version of the second flush.

Along with the CTC teas mainly used for teabags, you have the rich orthodox teas which are full bodied, malty and (depending on the tea) filled with notes of chocolate or other mature sweet tastes like tobacco, berries, cherries, almonds and more. The liquid produced by an Assam tea is nicely thick.

And What About Nepal?

Nepal is nestled deep in the Himalayas, between China and India. In tea terms, Nepalese tea is very close Darjeeling tea, which isn’t surprising when you see how close the regions are on a map. While Darjeeling has been privatized for decades this only happened recently in Nepal,  meaning the teas are beginning to improve in quality.

There are still some problems in Nepal, with poverty, political instability and poor infrastructure holding the region (and its teas) back.  But I believe that Nepal will shine like never before in the coming years.

If you have any questions about the teas of India and Nepal, please leave a comment below.

Don’t forget to join us when our journey continues! 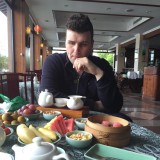 Comments will be approved before showing up.

Also in All about tea - The first step into tea wisdom. Wisdom is the path to better tea

Take the first step on your journey.